Simple as pie! Next, you need to get to the very bottom of the ship underwater, mind you to open the lock box. Go to the north side of the ship swim around and at the bottom you'll see a hole in the side of the ship. That's where you need to enter. Facing in that direction, the lockbox will be on the right, but pretty much right in front of you. To the left are two cursed marines. If you have stealth, hang a right. Then restealth and swim back out and you're home free. If you don't have stealth, you can easily grab that first sailor. I highly doubt the second will aggro, although I have not tested this.

Even if the second one does aggro, you're only facing two mobs. Hope this helps. Comment by Thottbot Very very easy indeed, i walked on the ship from the back to get the key. Comment by Allakhazam Be aware that you can get to the chest without causing aggro to the surrounding undead but the minute you try and open it they all attack.

Comment by Allakhazam The lockbox is on the bottom level of the ship. 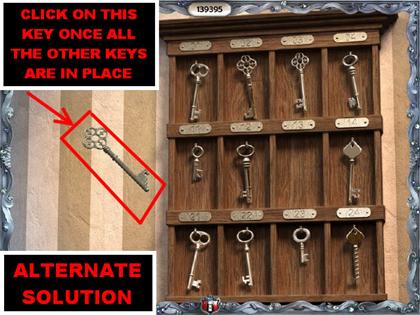 It is very small so look for it hard. The easiest way to get to the lower level of the ship is to go around the South side of it and go under water and enter through the tear in the bottom of the hull. The lockbox is right inside there. Comment by Allakhazam OK Thanks to the previous posters who helped me not get killed right away!


I walked up the stern plank expecting the Captain, but he must have been waiting just out of sight, because I only got halfway up the plank when he jumped ship and came after me. I was able to kill him on the first try.

MixtapeMonkey | Key! - Fathers Are The Curse

Then I swam stealthed to the seaward side of the ship and dove to the bottom where the hull is breached. I saw the chest While I was contemplating how to get to the chest, I heard someone else attacking the mobs, out of sight, but they must have been near the chest. All the mobs all of them! I swam to the chest, opened it, got the Eye, and swam out, surfacing without having to kill a single NPC! That way you don't have to wait for the quest text to "write", and you can save several seconds! Comment by Allakhazam the box and the captain on the same boat. Comment by Allakhazam Whoops should have read the quest properly.

All sorted now. Edited, Jan 26th am by CanonAxe. Comment by Allakhazam I soloed as a 28 hunter, it's a very simple quest, and hopefully you have the griffon ride to Stormwind or Ironforge. I wanted to add that there are two chests at the bottom of the ship, and the right one will be correctly labeled Intrepid's lockbox or something like that.

Good hunting. Comment by Allakhazam For paladins this quest is very easy After killing the captin just Jump yo the wather The little "hole" is at the west side of the boat. When u know where the chest is, take your devotion aura on, and just swim in it. You dont have to waite for hem to open it, and press compleat, accept and swim the hell out of there! Take your blessing of freedom on, and escape. Jobs done. Comment by Allakhazam Took the boss with a lvl 29 pally, Vergians Fist ftw :. I couldnt manage to pull 2 marines, always ended up pulling 3 marines and 1 salior on the chest, managed to solo them still.

Luckily there's no annoying 'opening' bar, the only thing you have to wait for is the text to write itself out. It's hard because you can't see how close the mobs are to each other when you're trying to pull them, I died several times completing this quest solo 30 hunter with a 24 pet , and the reward wasn't exactly worth it in my opinion. Comment by Allakhazam Didn't know this spell existed in the game until I met up with the good ol' captain here. I am a level 29 human mage, frost spec, and this guy is someone I can not take down for that very reason. Even his goons don't give me any problems.

That blasted reflect spell nails my fire and icebolts right back at me, causing more damage to me than to him, of course Thought I'd give any mage, priest, or warlock the heads up that he can use that ability. While he tanked I quickly got the chest and swam out,he was still alive so when I got out of the ship I made him passive and follow me and neither of us died. Comment by Allakhazam Titan bar 14,23 only three guys down there. Go to the very bottom of the ship underneath.

Comment by Allakhazam As a lvl 30 rogue I found this quest quite easy. Here's how I did it. First, I always equip with water breathing potion when doing a water quest. It gives you 30 mins of underwater breathing and you can eliminate the distraction of Breath. If you don't have alchemy, get a guild member to make it for you or buy it at AH. He's quite easy to pull and defeat, loot the key to the strongbox.

Second, jump into the water go into stealth, and swim into the bottom level. Swim over to the strongbox, open it. This brings you out of stealth, but no matter. Loot the box and accept the next quest you are being attacked by mobs at this point. Vanish make sure you have flash powder! Mobs lose interest in you. Swim out and away. Takes 2 mins. Comment by Allakhazam this quest isnt so hard.

Comment by Allakhazam The captain is a level 30 mob, and spawns above the hold in the eastern part of the ship. With people a very easy kill. You can fight here withough being under water, which is nice. After killing the captain you need to clear to the front of the ships hold to get to the chest. This is done by dropping through the hole in the deck in teh captain's room among other access points. We did this by pulling the mobs at a time back to the captains room, so we could kill them there without worrying about breath issues.

Once most of the route to the chest was cleared we moved to the chest, killed the last two mobs, and all looted. Comment by Allakhazam Ok, the captain and lockbox is in the Northern Crashed vessel. The first mate who you had to kill in the previous linked quest is in the southern ship. The northern ship's coordinates are 14,23 The backdoor entrance they're talking is an underwater break in the hull on bottom of the vessel, it's on the side of the vessel away from the shore.

The chest is right on the inside, however as soon as I got a look at it, 10 mobs jumped me, and I'm lvl Anyways, I reseurected in the "northern" part of the ship, where it's a lil bit out of water, so I was able to breathe. My tracker showed the captain right on top of me but I couldn't see him.


I sent the pet after him and he went right through the closed "window" and started attacking the captain. I guess he's outside the boat. I recalled my bear and the captain followed him in right through the window. I couldn't myself pass through the grated window, guess I used this glitch to my advantage. Edited, Sat Jan 28 Comment by Allakhazam The next quest in the chain is "the Eye of Paleth".

Comment by Allakhazam I'm a level 30 druid, and i easily completed this quest alone, maybe down to the fact that the captain was easy enough to kill, i then prowled through the ship and went undetected.

Swim towards the ship and, from a distance, target the captain but do not attack yet. Swim back to the shore. Now, send in your pet. Call your pet back and fight the captain far away from his shipmates. Easy peasy. It is so much fun to see the captain run down from his ship, angry at that beast that attacked him! Comment by Allakhazam What does Glorin reward you with?